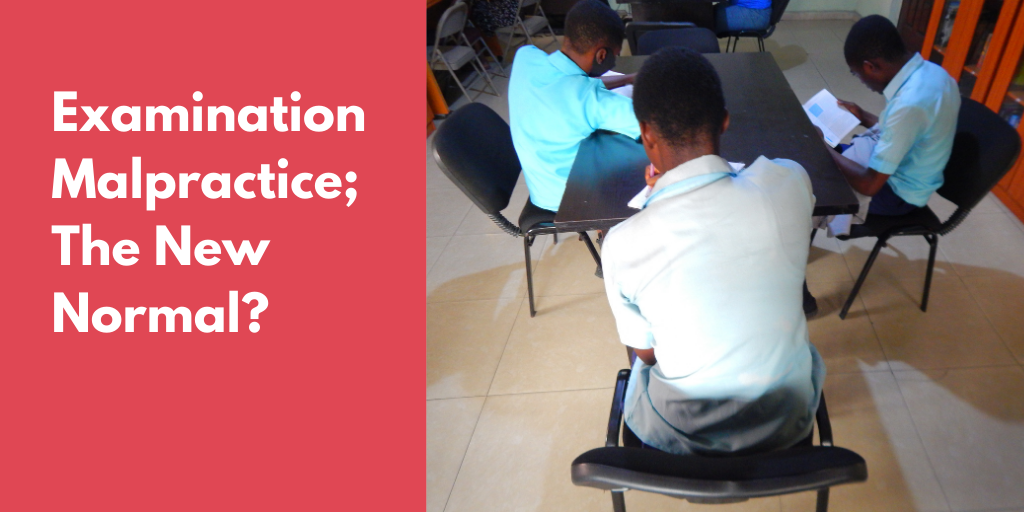 If ‘Education’ is the process of facilitating learning, or the acquisition of knowledge, skills, values, beliefs, and habits why then are students in Nigeria being penalized for their refusal to ‘sort examination invigilators, school management and those responsible for organizing examinations in our learning institutions?

As at 2017, WAEC acknowledged that 214,952 candidate results were withheld due to examination malpractice, in 2018 WAEC acknowledged that there were cases of examination malpractice but declined to give the statistics. It is now a common practice in many secondary schools and I dare say, even primary school for students writing examinations to raise a certain amount of money that would be used to bribe the internal or external invigilators to permit the students writing national examinations to openly cheat without any dire consequences.

However, for students who decide to defy this ‘new normal’, they are met with the penalty that should be meted to students who actually cheat. This is the sad story of Chioma, a Keeping It Real Foundation beneficiary. Chioma was a senior prefect in a private secondary school in Port Harcourt, Rivers state. The final year students in her school who were registered for the West African Senior Secondary School Certificate Examinations (WASSCE) were asked to pay Two Thousand Naira each (N2000) which was to be given to the external invigilator to permit the students to cheat and have extra time during the examination. However, Chioma and some of her classmates were courageous enough to say no to this arrangement. Therefore, the invigilator decided to reduce their time allotted for Mathematics which was supposed to last for two hours to thirty minutes in order to frustrate them. When the results were released, Chioma failed Mathematics and has to retake the subject.

Company such as; Cinfores a rapidly growing Information and communication Technology (ICT) Company in Port Harcourt, Nigeria has contributed immensely to the educational sector by introducing Brain Friend a product where students can access up-to-date educational resources that are instructionally effective and engaging in order to eliminate examination malpractice

According to Chioma; ‘I felt like giving up, I felt there was no point going to school”. Her older brother invited her to Keeping It Real Foundation, where she met young people like herself who are willing to pay the price for their principles. Chioma was willing to lose one academic year to maintain her integrity. In a society where most young people like Chioma are punished for doing the right thing and those who commit crimes are rewarded. We need more role models like Chioma to change the narrative. Kindly support Keeping It Real Foundation to continue teaching young people values that enable them to stand up for what they believe and to be positively influence the society. Chioma says that to her, KIR Foundation is a Potter’s House where youth are being molded for good success.