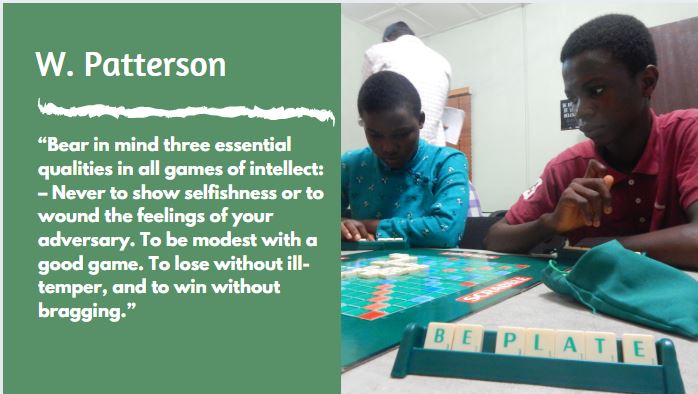 In 2017 August, KIR Foundation introduced Board Games like (Chess, Scrabble, The Game of Life, Monopoly etc) to enable the youth in the Centre learn 21st Century Skills like Creativity, Collaboration and Critical Thinking to empower them to become solution minded and problem solvers in practical ways. In September 2017, the KIR Foundation team, set up the Games Club. Since then, more than 100 young people have learnt how to play these Board Games in our Community Centre. The feedback we have gotten from them is that playing these games have taught them to focus, be more patient, acquire new words, increase their critical thinking skills, develop the spirit of sportsmanship, make better choices, knowing that their actions have consequences, respecting rules and ethics, planning etc.

According to Timothy Alexander, one of the Club members and the winner of the KIR Foundation Chess Competition (Senior Category); “Chess has taught me a lot of things, one of which is: Sacrifice. You have to let go of some things you want to get what you need.”


In September 2017, the young people had a lot of fun when they played a competitive game of ‘Body Chess’. However, this year, the KIR Foundation team decided to have an amateur Chess and Scrabble Competition among the members of the Club to promote collaboration and good sportsmanship. Therefore, on the 25th of July 2019, KIR Foundation organized its first-ever Chess and Scrabble Competition with 12 competitors, 8 of them played Scrabble while 4, played Chess.

The winner of the Scrabble Competition was Campbell Omuboye. He scored 134 points beating the 2nd runner-up with only a point which proved that every single letter is worth a point in scrabble and could determine who wins or loses the game! The winners of the Chess and Scrabble competitions were presented with their very own Chess and Scrabble Boards to encourage them to become more proficient players.

Okanlawon Martins, the winner of the Chess Competition (Junior Category) said; “Participating in the Chess and Scrabble competition pushed me out of my comfort zone and forced me to think strategically. I’m really glad I took part in this competition and now I have my Chessboard!”.