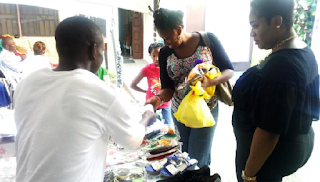 KIR Foundation 4th Annual Charity Fair held on Saturday, the 19th of November, 2016 at KIR Foundation Inclusive Resource and Rehabilitation Community Centre. The aim of the KIR Foundation charity fair is to advocate for the inclusion of persons with disabilities in society and to emphasize the fact that there is ability in disabilities. Majority of the items sold during the charity fair were made by our beneficiaries with disabilities.
And all the proceeds will be used to host the Prize Giving and Book Donation Day 2017 at the Special School for Handicapped Children at Creek Road, Borokiri on the 3rd of February 2017. The event commenced at 12.25pm with an opening speech and prayer by the chair lady of the event, Barrister Mrs. Cordelia Eke, the Coordinator of African Women Lawyers Association, Rivers State Chapter. 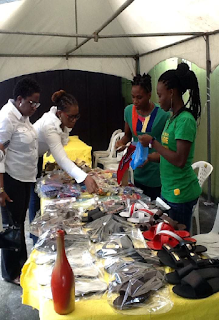 The activities for the charity fair included the viewing of Advocacy videos promoting Inclusion of persons with disabilities, shopping at the various stands; including a stand managed by the Deaf women who had participated in the vocational skills training. Some other events were; cocktail, raffle draw, music by Kelvin Diri, Nataniel Anderson and Emmanuel; youth from the TGIIF Youth Hub.
The Charity Fair was supported by the following firms; Sable Creations, Trumart Limited, Lyseis Forte, Red Chili Caterers Services Limited, ARTNOITED Limited; and Norwegian International School, that donated a 15 feet ChristmasTree for the event.One of the highlights of the fair was the display and auction of the paintings produced by the children at Dbenevolent Care Orphanage. The children have been mentored over the last three years by Tonye Pollyn. Tonye Pollyn is a longtime KIR Foundation volunteer and is currently the KIR Foundation Best Volunteer for 2016.