The Dreams of A Street Child 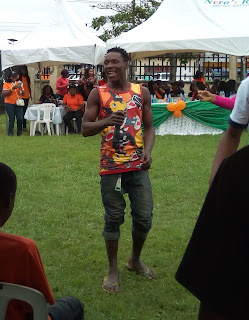 Okon Akpan rapped “I’m unstoppable, I’m unstoppable, I’m unstoppable, I’m unstoppable”.
At an event organized by the African Women Lawyers Association (AWLA) for street children to commemorate the Day of The African Child, Mrs Bitebo Gogo, Executive Director of Keeping It Real (KIR) Foundation, spoke to the youth about the power of leadership and asked them, “What are your dreams for the future”.
In their response they stated their desire to get off the streets and actualise their dreams of becoming a mechanic, an electrician, a tiller, a baker and a musician.
Okon Akpan who hawks on the streets of Port Harcourt said he wants to be a musician in the future. He did a short rap free style for the audience in which he wowed everyone with his performance and in the end of it he stated “I’m unstoppable”, with which we believe given his current attitude, he will be unstoppable.
The 16th of June was a day set aside by the African Union to mark the struggles of the African Child and its known all over the world as the Day of The African Child. This year the theme for the Day of the African Child was “Accelerating protection, empowerment and equal opportunities for children in Africa by 2030″. To commemorate this day, AWLA organized an event for street children in Rivers State. Keeping It Real (KIR) Foundation among other Non-Profit Organizations in Rivers State partnered the event.

The dreams of the child in the street can become a reality, with more advocacy, sponsorship and empowerment. Stand up for the African child today and empower them for a sustainable future.